Little history of my car…

This car has only had one other owner from new who imported this fresh from the factory from land of the rising sun back in 1999.

When I picked her up from a small local garage in Macclesfield, she was pretty much standard, only mod was the HKS Super Dragger centre section and backbox. other than that bog standard, previous owner had kept all receipts of all work and service carried out, so she had been very well looked after.

few pics from the show room 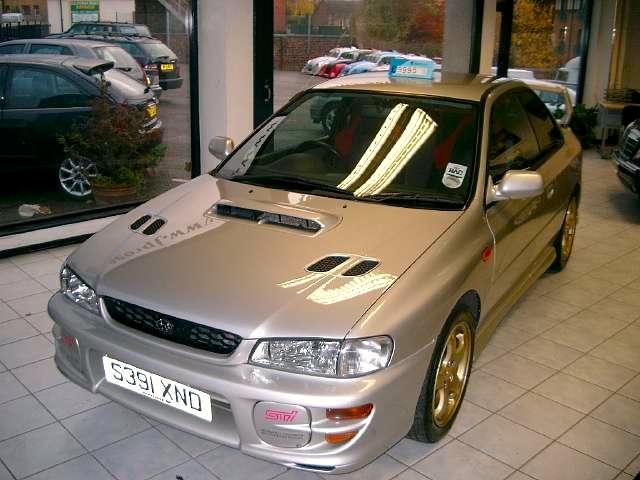 Within the fist week of ownership, car went straight to www.Scoobyclinc.com for a checkover, a full service, all fluids changed, new cam belt and a set of Defi Gauges (Boost, Oil Temp and Pressure)

the car was in great condition, and drove really well,

In 2009, it was time to change the power plant out with the 2.0 litre, in with a 2.5 (EJ257) STI bottom end, Mahl forged pistons, version 5 heads (from my old engine) skimmed, standard turbo was kept VF28, scoobyclinic oil cooler, to keep them temps under control. After a running in the new engine, she was mapped on an Apexi Power FC with Commander and made pretty good power on pump fuel (Shell V-Power 99RON) 295BHP 350 FtLbs

Only downside, the standard MAF could not cope with the extra air flow, and I was going through 1 a month, I even had to resort to running with spares in the car. This was quickly resolved an a Nissan MAF Z32 30P00 (compatible with the Apexi) was fitted. This fixed the issue and no more MAF failures.

2010 and next major work, was to attend to the rusting rear arches, so old arches were cut out and new ones fitted. A V6 front lip was also fitted, to tidy up the front end.

2011, and the standard VF28 turbo died. So in went a scoobyclinic SC46 turbo, 740cc injectors, K&N Cone Filter and Scoobyclinic turbo inlet hose. due to standard 5 speed gearbox still being on the car, mapping was conservative so not to put too much stress on the transmission - 350 BHP 350 FtLbs.

with the extra power and close ratio gear box, the car was awesome, but the limiting factor was now the brakes, the standard STI 4 pots were not up to the mark, and brake fad was an all to common occurrence, so a set of AP Racing 6 pots with 330mm rotors were fitted to resolve this problem.

a little bigger and fit nicely inside the 17’s

2012, the SC46 turbo was swapped for a SC38, Apexi Power FC and commander swapped for an Alcatek ECU including Anti-lag and Launch Control. an STI 8 TMIC was fitted, as this is bigger than the OEM item.

The smaller SC38 turbo is superb on the 2.5. It spools early down the rev range, and combines with the torque from the EJ257, resulted in a very fast road car.

My next focus was looking at the handling and some Rear STI trailing arms and lateral links or ‘Pink Bits’ as I like to call them were ordered from Japan.

2013 first mod of the year was changing the exhaust system. I must be getting old and I no longer wanted a loud noisy exhaust, but something subtle, have the JDM feel and look and quiet enough for track days. After many weeks of hunting and searching, I finally made my mind up. A Fujitsubo RM-01 was needed. second hand units were hard to come by which were in good condition, and that were not Jap style and angled up. I contacted japanparts.com who informed me this exhaust is no longer available for my model. However, they contacted Fujitsubo who very kindly made one to order for me. Result.

One slight problem, this exhaust is a once price from down pipe back, so picking this up from FedEx was interesting

Next focus, handing.. The car was subjected to a track day had great fun, but the handling was not great and the Hot Bits DT1 coil overs (fitted a few years back) were not really up to scratch.

Not cheap set of mods, but totally worth it and completely transformed the car, and gave me more confidence to push the car harder on track days…

2014 - Back end of 2013, the broke the standard 5 speed gearbox after my second track day, it was time to source a better and stronger box, which could handle track day abuse, launching etc…

Late in 2013, I stumbles upon a complete 5 speed PPG straight cut gearbox with a Kazz plated front diff, going cheap. after a few months, I was not getting on with the box Specially the diff, and missed the close ratios of the standard JDM 5 speed box. PPG was sold and in went a JDM 6 Speed from a version 8 STI with matching rear diff. At the same time the box went in a few perrin goodies were added to improve the 6 speed shift response, new Exedy Pink Box clutch, lightweight flywheel and crank pulley.

This pretty much brings us up to date. There are a few more mods in the pipeline, there is always something to change and upgrade.


Below you will find the most recent pictures of my car after a full detail and a full modifications list.

Very nice specked Type-R and I like your attention to detail.

Your new exhaust I really like, is it a 3" system?

Thanks for your comments guys

Carboy said:
Very nice specked Type-R and I like your attention to detail.

I believe it is
further details can be found here

Time for a little update to this thread and provide a little teaser of whats to come....

So today, I popped up SCR (www.scoobyclinic.com) and finalised the next set of mods and gave Kev the thumbs up to proceed

I'm not chasing a power figure or number, IMO its how it drives and handles
I'll update this thread as things develop over the winter months
my site - https://essbon.wixsite.com/typergc8
my build/mod history https://www.type-ra.com/subaru-forum/threads/essbons-impreza-wrx-type-r-sti-version-5.18082/
my instragam - https://www.instagram.com/essbonjdm
car maintained by - https://www.chevronmotorsport.com